As Dennis stepped up to the microphone to speak to a group of people with Parkinson disease about his experiences using Duopa, he felt confident and prepared. Introduced as someone who found that his oral medications no longer reliably suppressed his symptoms, he began to tell his story.

Like other people with PD, Dennis relied on daily doses of carbidopa-levodopa throughout the day to maintain his motor functions. This tried-and-true medication for diminishing the slowness, stiffness, and tremors of PD worked well for the first few years. As time passed, he had to take higher doses more frequently to have the same effect, and those higher doses caused more and more dyskinesias. No matter how much and how often he took levodopa medications, daily OFF times increased. Dennis found himself spending more and more time at home, inactive and unconnected with the people and activities in his life.

Dennis and his wife Kathryn began exploring ways to diminish the OFF times. They Googled. They looked at the PMD Alliance website’s Treatment Options resource. Then they asked Dennis’s doctor about Duopa.  Duopa is carbidopa-levodopa medicine in gel form – the same medication that Dennis was taking orally, but with Duopa it would be automatically delivered through a tube attached to portable pump he’d wear on his waist. The tube would end internally in the small intestine under his stomach. With PD medications, that’s the place in the body where levodopa is actually absorbed.

Initially, having a tube placed in his abdomen wasn’t something Dennis wanted to do. Then his doctor told him about the many people with PD and other diagnoses who use pumps for their medications. He also learned that the Duopa treatment has been in use for years in other countries around the world.

Dennis and Kathryn did their due diligence. They read the studies. They talked to a Duopa nurse. They sought out people with PD who were using Duopa to hear what they had to say.  Dennis ultimately decided to try Duopa. The tube placement procedure went well and the Duopa nurse taught Dennis how to use the pump, keep everything in clean and working order, and how to order and store the gel packets. The pump delivered medication every 57 seconds for 16 hours every day. It even accommodated special bursts of medication for those times when he needed a little extra dopamine.

Now, standing on stage, Dennis began to tell his story. Kathryn watched him from the front row. When she noticed that he was beginning to falter, she motioned for him to activate his pump for an extra burst of medication. Dennis pushed the Extra Dose button, felt better immediately, and continued to talk confidently about how he gained more ON time to stay active and engaged in his life.

If you’d like to know more about Duopa, watch a short overview from neurologist Maria Cristina Ospina, MD, by clicking here. Want to feature a speaker like Dennis at your support group? Email us and we can connect you to a Duopa nurse or ambassador in your area. 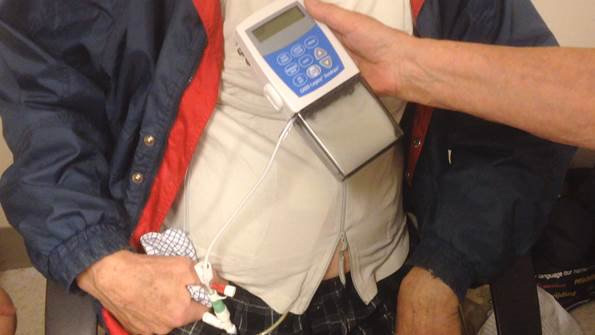 You can learn more about Duopa by CLICKING HERE.