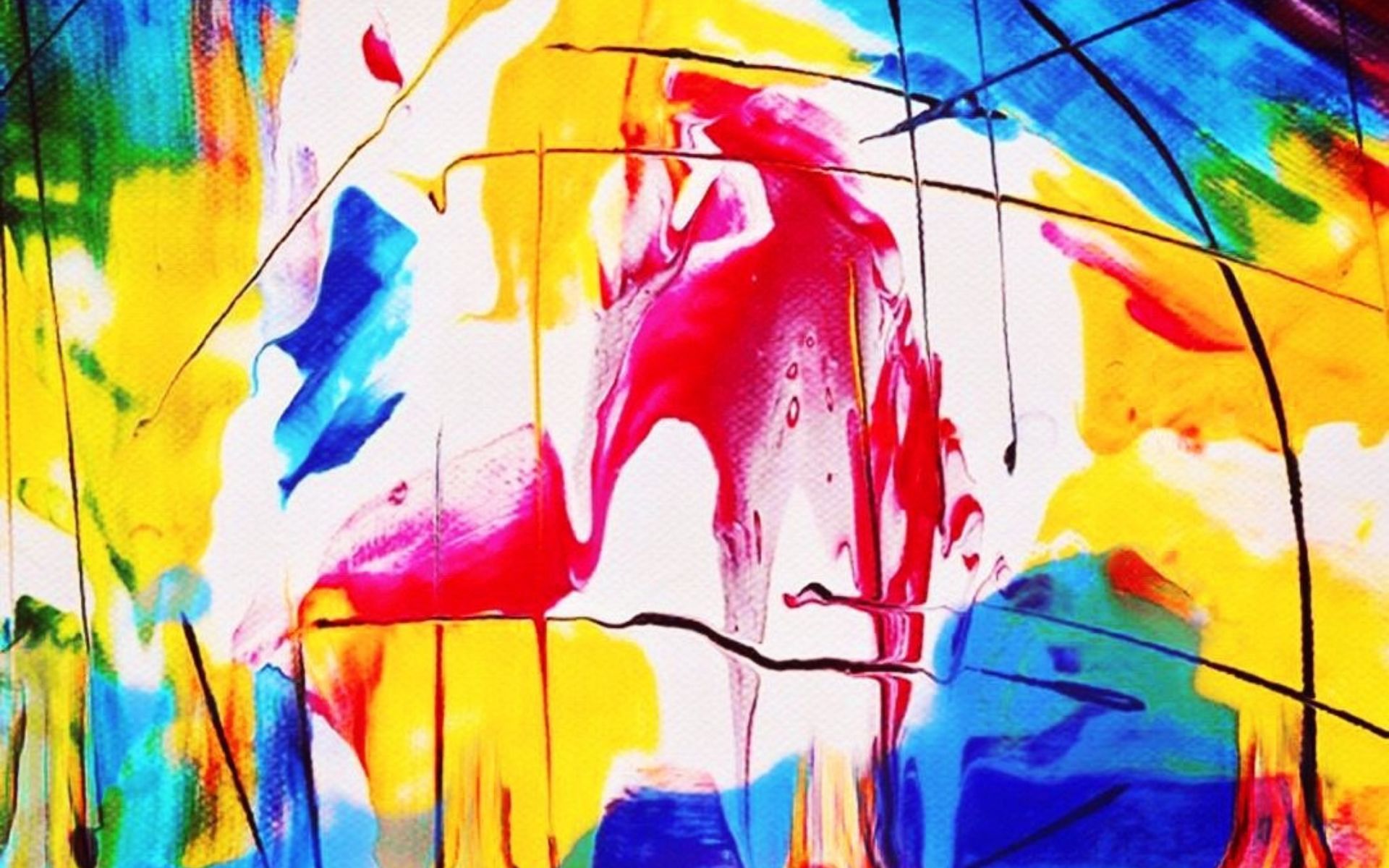 By Ashley AstiAugust 1, 2022 No Comments

The last time Jennifer Thomas, who goes by Niffie, remembers drawing anything, she was in elementary school: “I think I drew a tree,” she laughed. “I did have an artistic life,” she said. “I was a performance artist my whole life, a world champion Irish dancer and pianist. But I had never drawn or painted anything.” Not until brain surgery and an unexpected creative awakening changed everything. 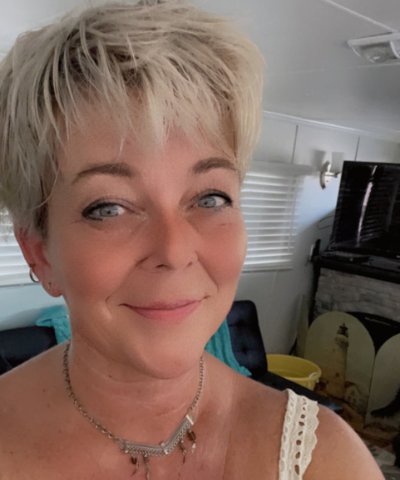 In 2016, Niffie was diagnosed with Parkinson’s. It was three days before her wedding. She recalls being in shock. At the time, she worked at a hospital and it was a doctor she worked closely with who said, “I don’t want to be the one to give you this diagnosis, but…”

“I remember feeling disbelief,” she said. “I don’t think I really accepted the diagnosis until they screwed the halo on for my DBS surgery.” After Niffie’s diagnosis, she had been prescribed carbidopa-levodopa and, at first, she responded well. But OFF time quickly crept in on her, amping up its presence and frequency. Seeking support, she connected with a movement disorders specialist at the University of Alabama who was doing a study on a new form of deep brain stimulation (DBS), which was directional. Niffie admits she is squeamish—”the most squeamish person on the planet,” she said, laughing—which made the thought of awake brain surgery surreal. But her OFF time was so intense that she wasn’t able to function with the quality of life she felt she should. In a span of 60 days, she went from being accepted into the study, going through all the qualifying testing, to surgery.

She almost wasn’t going to go through with it. The morning she walked into the hospital for surgery, it was still, as she puts it, an 80/20 chance that she wasn’t going to go through with it. But she remembered what DBS was keeping her from, and that propelled her through the fear. By the time she was preparing for her surgery, she was working for the Sheriff’s Department as the Director of the Victim Advocate Program. Some of the victims she supported came back to her and said, in her early interviews with them, they thought she disapproved of them in some way. Niffie had a severe body tremor and would shake her head a lot. “They thought I was disagreeing with them,” she said. “That broke my heart to think that these victims were thinking I didn’t believe them or didn’t empathize with what they were going through. That was a big motivator for me to get DBS.”

The First Time: An Unexpected Urge

Three days after her surgery, Niffie was sitting around the house she and her husband had purchased two weeks before. “I didn’t have anything to do, I felt pretty good, and all of a sudden I felt I really wanted to paint something.” It felt like such a bizarre idea to pop into her head, but it wasn’t just an idea; she describes it as a compulsion. “I had to paint something.”

Her daughter was in college at the time, but she dug through her old paints from high school. She didn’t have any paper, so she decided to paint her brand-new kitchen. “We had these pristine white cabinets and every cabinet door got something on it. My husband came home and, bless his heart, he’s a very patient man, was like, ‘Wow, I love what you’ve done with the kitchen,’” she said, laughing. “We had a pink and black cow print cabinet door, a moon scene, a waterfall.” This was the beginning of her creative awakening. 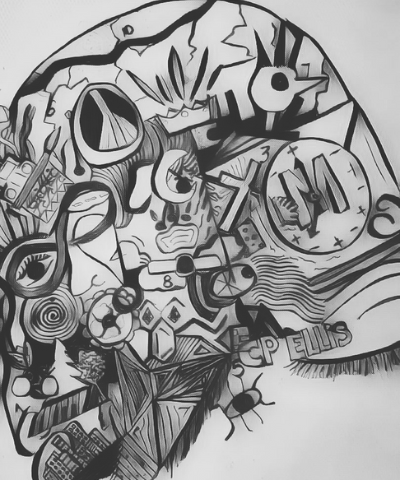 To this day, Niffie’s urge to paint surprises her: “Every time I finish a piece, I’m surprised. It’s like someone dropped it off at the front door. I sit back and think, ‘Wow, I wonder where that came from?’” It’s as if she’s not directing the creation of her art so much as it’s coming through her—beyond her control and, yet, intimately connected to her.

Her paintings don’t begin with a final destination in mind; they spark her with a feeling: “When I start painting, it’s a mood for me. My drive to create is tied to color. I’ll sit down and feel like, ‘Today is a yellow day.’ And that’s what prompts me. On my black days, it’s when I do my line drawings; they’re very focused and very difficult because of the tremor. On those days, I know I’m looking for a meditative escape.”

In fact, the meditative experience of painting often relieves her tremor: most of the time when she paints, her tremor isn’t a problem. On days that it is, she chooses chalk, a forgiving medium that still allows her to let the creative urge through her. “I get so into painting that it’s really the only time I feel like I don’t have Parkinson’s,” she said. “It calms me.”

The experience of painting is riveting for Niffie: “If I have the urge, it doesn’t matter if I’ve had a doctor’s appointment scheduled for a year; it’s not happening that day. Because I have to sit and create when I feel it and I never know if it’s going to be a 10-hour creation fest or it’s going to take me 15 minutes to do a piece that, looking at it, you’d think it’d take me days.”

Niffie believes in making use of what’s available. One of her pieces is an eagle head. That one really surprised her, she said. “I was drawing with a ballpoint pen and, the next thing I knew, I had an eagle.” Someone asked her what medium she used and she laughed. “There’s highlighter in there and a little Whiteout. Whatever is laying around is how I create my pieces.”

Today, Niffie sells her work, but only if someone asks. She doesn’t seek out buyers, she merely hopes to allow her voice the freedom to arise through her paintings.

“Did DBS trigger this?” I asked Niffie.

“Without a doubt,” she said. “The doctors can look at it all they want,” and they can speculate, but she knows.

Niffie believes her urge to paint has unleashed something previously sheltered in her: “I think I had a lot to say and I think my art is me saying it. A lot of the time, I have no idea what it is I want to say, so it comes out in my art. It’s like this compulsion sparked what’s in me and, now, I feel compelled to say it, like my art is a piece of me. Everything painting I create represents something I’m going through or thinking about or remembering. My art is like I threw up all over the room; it’s just me everywhere. It’s like I want to make sure I get who I am out before who I am changes.”

This is why she calls Parkinson’s her “biggest blessing.” “Don’t get me wrong,” she added, the physical stuff sucks. I hate to hear anybody that has it. It’s a shitty disease.” But it has also gifted her the unexpected. “Parkinson’s took my piano, it took my dance. I grew up dancing with the crews of Riverdance. It was a major part of who I thought I was. Parkinson’s took that and it was crushing. It took my identity. But then it gave me a paintbrush, and I could still share myself. I could still share my experience.”

As we went on talking, Niffie’s wisdom kept pouring out of her: “Everyone has such an individual journey of Parkinson’s, but the one thing I think we share is that fear or apprehension of losing our sense of self. What I would share is don’t be afraid. I’m not going anywhere, my ability to communicate who I am may change, but who I am isn’t going to change.” Her words began to call me to action, inviting each of us to embrace who we are. “Embrace the things you love,” she urged. “Embrace the people you love. Don’t be silent. That’s something we all fight. Let your voice be heard, no matter what it is you have to say.”

Niffie knows life with Parkinson’s is not always easy. She believes that some of her paintings are her exorcising demons. Still, she never tries to suppress her desire to create. She doesn’t think you should, either: “If there’s anybody with Parkinson’s listening—if there’s even a brief moment where you feel like you want to write or draw or sing, grasp that because it’s your soul that has something to say.”

Through her art, Niffie is tapping into the beauty of life despite everything—despite the challenges, the obstacles, the disappointments and pain. “If I can’t get out of the chair,” she said, “I have a beautiful moment where my dogs come over and they love on me and they let me know it’s okay. For every terrible, awful moment, there’s something beautiful immediately following it, even the tiniest little thing. There’s grace in the diagnosis. Yes, there’s grace.”

Beauty belongs to us all; no diagnosis can stop us.

Get creative with poetry. Submit an I AM!™ poem to the World Parkinson Congress, where it’ll be displayed in a garden of poems from people impacted by PD across the globe.

For this Nurse Practitioner, PD is Personal